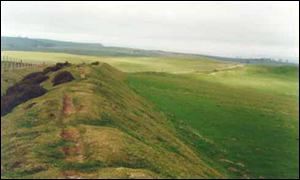 Offa's Dyke on a fair day

The Dyke, or Offa's Dyke as it is sometimes known, is a great earthwork consisting of a banked ditch (the word 'dyke' itself means ditch) cut for many miles along the border between the old English kingdom of Mercia and the Welsh kingdom of Powys. King Offa was an Anglo-Saxon ruler of Mercia who, according to medieval chroniclers, caused the ditch to be built some time in the 8th century. It was both a boundary marker and a defence. The Dyke runs through some remote country and in parts it has vanished away altogether.

It is while riding across The Dyke that John Hyde sees the fetch of Arabella Strange[43].

More on the history of Offa's Dyke may be found here.