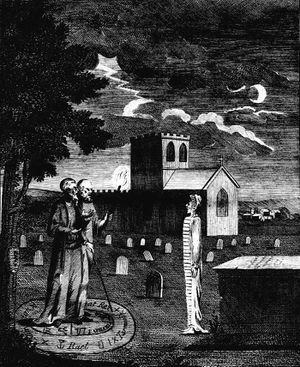 Necromancy is the forbidden art of disturbing the peace of the dead.

Although it is of course a possible magical procedure, it is one which arouses such strong abhorrence in the general public that most magicians profess to avoid it altogether, and indeed often condemn it in the strongest terms. One cannot easily imagine a Theoretical magician of the good old school - a Dr Foxcastle, say - even allowing the possibility a gentleman might stoop to such methods; for during that sad period when English Magic was so debased that it was only practised by charlatans and credited by fools, "necromancer" and "magician" became virtually interchangeable terms of scorn.

Although therefore necromancy is generally seen as "black magic" and avoided by men of worth, there have been a few necessary exceptions, because - well, in bald terms it must be said that in certain circumstances the Dead form the only reliable sources of information. Those exceptions germane to our narrative are listed below:

The answer is that Strange approached Miss Absalom by way of dreams, not by seeking to reanimate her corpse; and Lady Catherine's situation is, shall we say, obscure. Her death has never been reported; she may simply have removed herself to a region in which she was less subject to the depredations of Time.

And although she certainly returned from the dead Lady Pole of course cannot be included in our list, as the motive for her resurrection was merely the furthering of Mr Norrell's darling cause, the Revival of English Magic. He had no questions to put to her - and was, indeed, uninterested in anything concerning her. Hinc illae lacrimae.