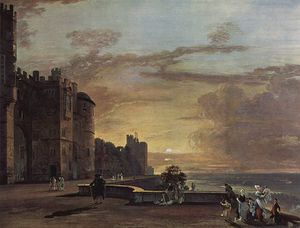 The castle at Windsor

The royal palace at Windsor was first built by the Normans, and so naturally its original character was military and austere; but over the centuries later monarchs have altered it greatly. Good Queen Bess herself was reputedly very fond of Windsor, and certainly it was one of the very few buildings in the improvement of which that prudent lady could be brought to spend her own money. More recently of course it has been adapted to the taste of the late Prince Regent, who unlike his royal predecessor was wholly unafraid of expense.

The work of restoring Windsor was begun earlier however by the prince's father, King George III. He was principally drawn to it by the charms of its environs, for it has an excellent park. In time he made Windsor his favourite residence, and it is to the Castle therefore that Mr Strange goes to offer his services to the king. By the time of their meeting however that unhappy man is little better than a prisoner among the melancholy splendours of his deserted palace[32].