The stones of York 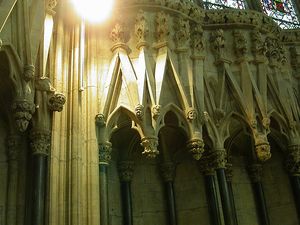 The stones of York refers to the magic performed by Gilbert Norrell to prove his abilities as a practical magician to the Learned Society of York Magicians.

In 1807 the Society's members, piqued on hearing of Mr Norrell's assertion that he was himself a 'tolerable practical magician', boldly challenged him for proof. In a spirit of irritation he agreed to furnish sufficient evidence - but only if they signed a contract stipulating that if he did so, they themselves would abandon the study of magic and cease thenceforth to describe themselves as 'magicians'. If, on the other hand, Mr Norrell failed, he himself would renounce his claim to be a magician [2].

On an early morning in February Mr Norrell invited the Society to attend at the Cathedral of York where he would demonstrate his powers to them. They came: and thereupon Mr. Norrell - presumably from his residence at Hurtfew Abbey, as he was not personally present - proceeded to cast a spell that awakened the statues (stones) in the Cathedral! Many of the statues talked, and related events they had witnessed over the many centuries since their creations, in languages reflective of their origins. The sound was as unnerving as it was tremendous. The spell stayed in effect for a full hour, starting at the toll of the half-hour bells and continuing until the half-hour bells of the following hour [2][3]. As a consequence of this overwhelming proof, the York magicians were obliged to give up their magicianship, much as had many other men Mr Norrell had encountered over the years. (And as an accidental consequence their entire collection of rare magical books fell into Mr Norrell's own hands, and was added to his extensive library.)

The Stones of York was a significant event, as it was the first widely known instance of practical magic performed since magic left England over 200 years prior (with the death of Martin Pale) [1]. Having been advertised to the wider world by Mr Segundus it brought Norrell widespread fame across The Kingdom, and spearheaded the Revival of English Magic.
Retrieved from "https://hurtfew.mywikis.net/w/index.php?title=The_stones_of_York&oldid=975"