The gentleman with the thistle-down hair

From The Library at Hurtfew
Jump to: navigation, search
The Gentleman With The Thistledown Hair, whose real name is not known*, is a fairy that rules over the fairy kingdom of Lost-hope (and possibly others). He was first seen when Mr Norrell summoned him early on in his career to bring Lady Pole back to life, and gains his name from his silvery-white hair, apparently his most prominent feature. He looks handsome and thin, has all the magical abilities of any fairy and indeed may be more adept at them than a normal one, though he can be exhausted after using a particularly powerful spell, like the Pillar of Darkness enchantment he cast upon Jonathan Strange[55].

We are told that he is tall, handsome, has a particularly pale and lustrous skin, cold blue eyes, and dark eyebrows that end in an upward flourish [8]. (Some aspects of his appearance may be generally characteristic of fairies, as one of the soldiers in the Fairy Host which accompanies the Raven King in his conquest of Northern England in the 12th century, and who is responsible for the exsanguination of the maid of Allendale, is also described as very pale, blue-eyed and with brows having "a curious flourish at the end". But it is of course conceivable - fairies being well-nigh immortal - that this is in fact the Gentleman himself at an earlier point in life[45].) We later learn that the Gentleman is exactly the same height as Jonathan Strange [26], which is to say rather taller than average. His clothes are always spotless, fine and in the height of contemporary fashion, and he habitually wears a coat of bright leaf-green. [16]

There is a suggestion however that the Gentleman's usual appearance may not be his natural one. At the end of the book, when he is fighting desperately for his life against Stephen Black, he begins to lose his humanity and appears more animal-like, with eyes further apart, snarling teeth and fur on his face [68]. (It is clear from the footnote regarding the magician Simon Bloodworth and his fairy-servant Buckler that fairies were able to alter their looks at will [5]. When he first meets Bloodworth, Buckler is small in stature and with a "thin, piebald fox-face". Improving in strength, he quickly gains two or three feet in height, his ragged clothes become finer and his face pale, handsome and human-looking. Buckler claims that his first appearance was the result of enchantment and that his second is his true one: but he is not a particularly trustworthy person and the truth may well be the reverse.)

In character the Gentleman is volatile, prone to very sudden changes of mood. This whimsicality is his most striking trait, even more than the complacent self-regard that colours all his speeches and actions. Yet, despite being given to extremes of hilarity and despair, he values dignity of deportment at all times [42]. He is acutely sensitive to fancied slights to his person or to his rank [59]. He is not generally fond of physical exertion. Like the fairies who accompany John Uskglass on his successful invasion of England, however, it seems he can on occasion be entirely indifferent to his own comfort. In the incident in which he fetches Stephen Black to Scotland in quest of a piece of moss-oak, he waits with patient unconcern in cold and darkness on exposed, boggy ground for a period of nine hours [42].

As to his notorious weakness for the ladies, certainly the Gentleman is a connoisseur of female beauty[8] and delights in the company of a charming woman[55]: but one hesitates to rank him with a Casanova or a Lovelace, much less a Bluebeard. His enthusiasm for a beautiful woman is rather the passion of a collector than the cynical lust of a true mangeur des coeurs.

The Gentleman being fortunately quite unaware of the disgust and horror his freaks of cruelty breed in Stephen Black, remains almost to the end happily convinced that just as he dotes on Stephen, so Stephen must dote on him. It is perhaps beyond his power to grasp that mere emotion is not the only influence on the actions of a rational being - that altruism, pity, empathy and morality all have their parts to play. Thus he does not suspect, when he hangs Vinculus and gaily announces his intention of murdering Lady Pole, that Stephen will be at all distressed by either event. Nor, of course, would it normally trouble him if Stephen did object; for there is no equality of power between them. This all changes when, thanks to the spell cast by Strange and Norrell requiring all England to greet "the nameless slave"- by which title of course the magicians really mean John Uskglass - the whole of England comes mistakenly to believe that Stephen Black is the king she has so long missed, and voluntarily offers all her service to him. Thus empowered, he is able to defeat the Gentleman and to kill him. It is of course typical of Black's mild, compassionate nature that he pities the latter necessity very much - but die the Gentleman must, if further death and misery are not to follow. Not even his immense magical skills can withstand the crushing effects when the whole of the English landscape turns and falls upon him in fury, and he shortly succumbs.

It would be happy indeed for The Gentleman if it could be said that those he leaves behind at Lost-hope mourn his loss. Sadly they do not, but look forward with unflattering relief to the more merciful direction of their new king, Stephen Black[68].

It appears to be Mrs Strange who is responsible for the sobriquet by which the gentleman is generally known, for she uses it in conversation with her husband in 1815[39]. (And, here, by-the-bye, we must suppose Strange at fault for merely rallying his wife about such an outré circumstance as this; that after an acquaintance of some years she has not even discovered her friend's name! He should have remembered that his wife was a rational being, and such a failure on her part was so strikingly odd that some other, more sinister explanation should have been looked for. In his excuse however let it be acknowledged he is not alone: gentlemen often do forget that their wives are rational beings.)

That the wily Gentleman should be so circumspect in giving out his name cannot surprize us, for, like John Uskglass, he is both a king and a magician, and we know from some remarks of Gilbert Norrell's what good care the latter always took to hide his true name[66]. No-one understood better the danger of placing such a tool in the hands of enemies. It seems though that any man may be summoned, at least, by using a name or description by which he alone may be identified. Strange succeeds in summoning the Gentleman—but not in forcing him to reveal himself when summoned—some time after the incident in which King George and Strange himself are almost tempted into Faerie. Perhaps, in lieu of an exact name, Strange simply describes the Gentleman as, “the fairy who enchanted the King of England and myself at Windsor” or some such circumlocutory phrase which, though long-winded, is particular enough to be effective. 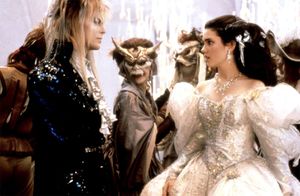 Although I'm not altogether very fond of modern-day interference with the Classics, and even less inclined to transpose 200 year-old consuetude to contemporary fashion, I do believe that the Gentleman might have looked like this late 20th century musician and actor in the motion picture Labyrinth.