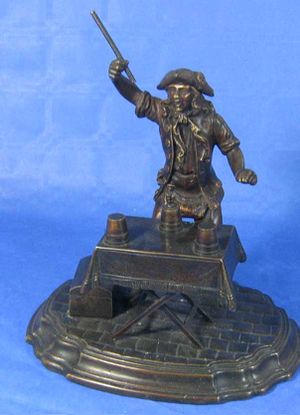 A bronze chewing a street-sorcerer. This one has sunk to common acts of legerdemain, such as the cup-and-ball trick.

Street-magician (or a street-sorcerer) is an appellation for one of that deceitful class of men which has done so much to lower the character and harm the reputation of English magic.

When true English magic departed along with John Uskglass, a generation of vipers soon grew up who merely pretended to magical powers, relying for their effects on legerdemain and trickery. Their impostures had some success among women - always sadly apt to be credulous - and with the weak-minded and ignorant, who are soon impressed by a Vauxhall-garden mountebank flourish. Some of these scoundrels thrived in country quarters and some busied themselves in London, often working out of nasty little booths with ragged yellow curtains where they fell into trances, cast spells that did not work and sold coloured water as love philtres to ladies' maids. Such a one perhaps was Mrs Wintertowne's childhood Mentor, Dreamditch; and such another was Vinculus, who had the honour to be considered the foremost of his kind. Vinculus indeed had quite a following in London, though most of his auditors were there to laugh at him: nevertheless, Christopher Drawlight was not alone in his admiration of Vinculus [21].


NOTES AND QUERIES: To the Editor: Sir
You speak with some asperity of the familiar cups-and-balls act which graces every thoroughfare, though it is a classic of traditional street magic with innumerable adaptations. Known in Ancient Rome as acetabula et calculi was performed by Roman conjurers as far back as two thousand years ago. It must be said most of its modern exponents play it foolishly but when done well it deserves its place on our streets.

Sir, here is an exceptionally rare piece of fabric representing a street-magician, albeit in a rather more bucolic setting than Threadneedle Street. Note that, he too, is performing a cups and balls routine.