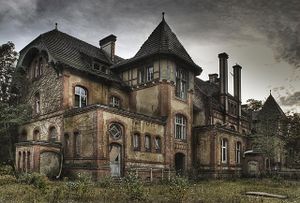 Not the actual Hall, alas, but a similar structure.

Starecross Hall, the principal building in the remote Yorkshire village of Starecross, is one of the several homes of a wealthy Mrs Lennox of Bath, a widow. It is later the site of John Segundus's madhouse, where Lady Pole is kept. It is thus the scene of her final liberation from the gentleman with the thistle-down hair[64].

How the hall first came into Mrs Lennox's possession we are not told, but it is evidently no part of her dower, for she has known and loved the place since childhood. It had however been her original intention to sell the house, until she met Mr Segundus. He came there by chance on an errand for a Mr. Palmer (father of one of his pupils) to appraise whether any books of value were in her library. Being a lady of quick decision, with a good head for business, when once Mrs Lennox learned that Mr Segundus was a practising magician she offered at once to enter into partnership with him and set up the house as a school of magic, with him as its master! Naturally Mr Segundus - and also his dear friend Mr Honeyfoot, and Mr Honeyfoot's lady, too, - were overjoyed at this promising prospect, while Jonathan Strange so approved the design he sent a hearty letter of congratulations. Unfortunately for Mr Segundus tho' Mr Norrell heard rumours of the plan, and promptly used his patronage and power to shut the school down[41]. He even sent word of his intentions through his servant, Childermass. The latter however harboured feelings of sympathy for the unfortunate victim of Mr. Norrell's jealousy; and though carrying out his master's instructions to the letter, he privately offered to help Mr. Segundus in future by any means in his power - if he might do so without crossing Mr. Norrell's will[41].

Later, having regretfully informed Mrs. Lennox they must give up their plan for a school because of Norrell's spiteful opposition, Mr. Segundus chanced to encounter a madman on the road as he set out for Yorkshire from Bath. Though the event made little impression on him at the time, it struck him on arriving at Starecross that the place, in all its lonely seclusion, would be an ideal haven for those distressed in mind. Shortly thereafter Lady Pole made her attempt on Mr. Norrell's life and it became necessary to remove her from London: John Childermass, true to his word, recommended Mr Segundus for her keeper, and so Starecross Hall became a madhouse[47].

Starecross is first described as "a long, low, rambling building" made of the dark local stone, with "neglected gardens, garths* and courts". Clearly a gentleman's residence of some antiquity, it has "an old-fashioned parlour with dark oak panelling and a mantelpiece the size of a young triumphal arch". The arrangement of the rooms is eccentric, and their furnishings even more so. The Hall we are told is too big for a farmhouse, but inconveniently placed to be anything else; and moreover the sole approach is across a very narrow packhorse bridge. From these hints one supposes it has formerly been the home of some local family of note, now declined or altogether passed away.

Under the care of Mr Segundus however Starecross is rendered much more agreeable, so that when Stephen Black arrives there, while accompanying Lady Pole to her new home, he is shewn into a room which "spoke nothing but comfort and welcome. It had been fitted up with paintings and pretty furniture, with soft carpets and cheerfully glowing lamps"[41, 47].