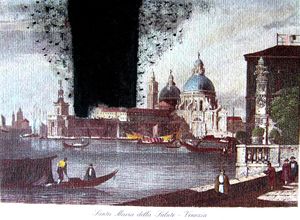 A Venetian engraving of the church of Santa Maria della Salute, shewing the Pillar nearby. (Note that the Chaos of Ravens is also present.)

The Pillar of Darkness (also referred to variously as the Black Pillar [59], the Eternal Darkness[63], the Perpetual Darkness[64], the Pillar of Constant Darkness [58], the Impenetrable Darkness [69], the Shroud of Eternal Darkness[58] or Ceaseless Night[58]), or sometimes simply The Darkness[69]), is the spell within which first Jonathan Strange and later Gilbert Norrell are imprisoned.
Although it will allow neither man to move very far from the other, the spell does not otherwise confine them physically - they are free to roam the world, indeed several worlds, at will. Rather it changes the nature of their immediate surroundings so that, wherever they may be, an area about the size of half an English acre about them is plunged into Perpetual Night.

The spell which creates the Darkness is cast by the gentleman with the thistle-down hair in revenge for Strange's boldness in following him to his kingdom of Lost-hope and out of his anxiety to prevent Strange from reclaiming his kidnapped wife Arabella. Although The Gentleman only intends to ensnare Jonathan Strange, by some imprecision of wording he creates a spell which also seizes upon Mr. Norrell when he too comes within its limits[66]. (Indeed Mr Norrell believes it might similarly entangle any other person who may possibly be regarded as an "English magician". If this is really so, then it was a fortunate decision on the part of our two heroes to go on a tour of other worlds and leave England entirely now that magic is returned to it. Their half-acre might otherwise become unbearably crowded.)

One would naturally expect the spell to dissolve on the death of the one who cast it, as is the case regarding the enchantments on Stephen Black, Lady Pole and Arabella Strange. This however does not happen. From a chance remark made by the fairy woman with whom Strange dances in the brugh, it appears it may last a hundred years before it expires[55] Why this should be so has been a cause of much speculation. It is worth noting however that of the three effects that occur at the precise moment when the Gentleman casts his spell, the first is described as "a storm of birds". This may well be the Chaos of ravens - a virtual hallmark of the Raven King's magic. Furthermore, The Gentleman's subsequent confession to Stephen that, in order to impose this immense spell his "old alliances have been stretched to their utmost limit" does not make it clear whether those alliances are merely with the natural world, or with other magicians[56]. If the latter is the case it is at least conceivable that one of those whose aid the Gentleman invokes is John Uskglass himself. This would possibly explain why the spell does not dissolve on The Gentleman's death: if it was cast largely with the borrowed aid of Uskglass, it will presumably continue till he chooses to end it. This theory of course does not explain why on earth he should wish to remove Strange and Norrell from the scene at the very moment English Magic is finally restored. Still, it must be said that a great deal regarding the Raven King's plans and actions remains a complete mystery.