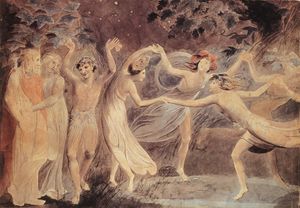 The Court of King Oberon: An artist's impression.

Oberon or Auberon is the name customarily used to refer to a notable king in Faerie.

When he invaded Northern England in 1111 John Uskglass claimed a famous ruler in Faerie was his overlord. He named him, but in the Sidhe language, which was peculiarly difficult for the English to follow. Traditionally the name of this king has been anglicized as Oberon.

Little enough firm information is known about this monarch; his name however has often been used by poets, who have made very free with his character. More may be found about him here [45].