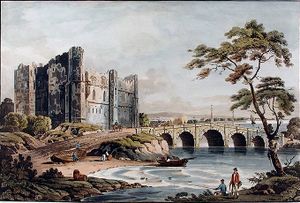 A view of Newark

Newark is a market town on the River Trent. In January 1111 it was the site of a decisive battle fought between the English forces of King Henry I and John Uskglass at the head of the Daoine Sidhe, the fairy host. Among the magical stategies deployed against King Henry's army at this battle was a wind bearing the sound of sweet music, which caused the English horses to flee with their hapless riders; the sound of voices, as if of their nearest loved ones, calling on the soldiers to come home; and the Chaos of ravens. Naturally the army could not withstand all this and the simultaneous onslaught of the Fairy Host, and the battle was correspondingly brief. The victory of Uskglass led to the establishment of his kingdom of Northern England, with the Trent forming its southernmost border[45].

The magician Peter Watershippe was imprisoned for a time in Newark Castle.

Today Newark is a thriving little town in Nottinghamshire, notable for its medieval stone bridge over the Trent and the very fine modern Town Hall overlooking the market place. The Great North Road passes through Newark.