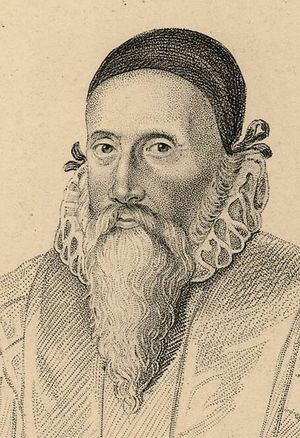 Martin Pale? This familiar engraving appeared first in Hickman's biography and forms the basis of most modern reproductions (such as the bust belonging to Mr Norrell). Recent research suggests however the costume is of a slightly later date, and this may be a portrait of another person entirely.

Dr Martin Pale (1485-1567) is in strict chronological terms an Argentine magician but, because of his remarkable abilities, considered in some ways the last of the Aureates.

He was born the son of a simple leather-tanner of Warwick, a mere artificer, and claimed to have learnt all his skill in magic from a lady who had died two hundred years before his birth: Lady Catherine of Winchester. She was herself of course an Aureate magician and a pupil of John Uskglass. Until the disastrous intrusion of Jonathan Strange into Lost-hope the intrepid Dr. Pale was the last Englishman willingly to enter Faerie, where amongst other places he visited the castles of Cold Henry[1] and John Hollyshoes.

His work as a magician was characterised by the lavish use of apparatus (such as the Quiliphon) and complicated diagrams [35] His interests were broad: among his written works is one which discusses the origins of fairy language, the De Tractatu Magicarum Linguarum.

In the first half of the eighteenth century Dr Pale was the subject of a biography by the theoretical magician Thaddeus Hickman[35].

On the evidence of some letters found in a library in 1754, Dr. Pale is supposed to have formed an alliance of sorts with a woman named Francis Pevensey, and to have sent her billets-doux and taught her magic. (Gilbert Norrell however was of the opinion that he did no such thing. It is one of the many points upon which he and his pupil Jonathan Strange held completely contrary views.[35])

Incidentally we may suppose that Mr Norrell, although seldom given to praise of other magicians, counted himself among Pale's many admirers, for he kept a little porcelain figure of him in his library[39].