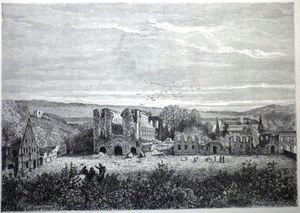 Lost Hope (drawing by Mr Charles Dreiser, 1823) - Mr Dreiser accidently fell through his mirror while hanging up a rather pleasant painting of Two Dogs Chasing a Hare; it took him 18 months to get back, after which he couldn't endure even the faintest tolling of the tiniest bell.

Lost-hope is the home of the gentleman with the thistle-down hair. It is usually located in Faerie, though at times it also appears to intersect with Sir Walter Pole's house in Harley-street and occasionally with Starecross Hall in Yorkshire. As Jonathan Strange excitedly observes on his first visit there, Lost-hope is in fact a brugh, inhabited by many fairies. At times it also holds several human "guests", including Arabella Strange, Lady Pole, and Stephen Black.

During the lifetime of The Gentleman, Lost-hope has the appearance of a great mansion, with many skeletons and rusting suits of armour lying in the courtyard, and a malevolent wood around it. It is however implied strongly that people will perceive the house differently, depending on the circumstances under which they view it - in short, on whether or not they may be under the power of a spell. Those who see it with perceptive eyes note that the house has fallen on hard times: "...at one end [of the ballroom], part of a wall had collapsed and lay in a state of disrepair. The furnishings were few and shabby, the candles were of the poorest sort, and there was only one piper and one fiddler to provide the music." [55] (It is a ticklish thing to decide however whether Lost-hope ever really was a splendid, many-towered castle which over time had fallen into decay; or whether it was never really more than a hollow hill, the appearance of which was altered by magic to spare everyone the fatigue attendant on actually building in stone. Sadly the innate indolence of the fairy race suggests the latter.)

After the death of The Gentleman at the hands of Stephen Black, as is traditional among fairies the victor takes his place as Lost-hope's new ruler[68, LoGA]. The appearance of his new realm immediately changes to mirror Stephen's kindly personality, rather than The Gentleman's "bloodthirsty nature" [55]. The skeletons begin to fade away, the wood no longer threatens travellers, and the house no longer appears as a grandiose and slatternly mansion but as a long, low hill of earth. In his first address to his new subjects Stephen states plainly that "This house is disordered and dirty. Its inhabitants have idled away their days in pointless pleasures and in celebrations of past cruelties - things that ought not to be remembered, let alone celebrated. I have often observed and often regretted it. All these faults, I shall in time set right." [68] This promise appears likely to be kept; which is perhaps more than can be said for many another promise made in a speech from the throne.

It is doubtful whether Lost-hope is to be the full extent of Stephen's new realm. Although it is the only kingdom of Faerie to which the gentleman with the thistledown hair takes his captives, during his conversation with George III it seems he claims to be the ruler of others[32]. Replying to a remark of the gentleman's that is inaudible to other listeners, King George observes that "I have never heard of any of your kingdoms. Where is Lost-hope? Where are the Blue Castles? Where is the City of Iron Angels?" It therefore seems these two places may be realms which the gentleman actually rules, or wishes to be thought to rule, or once ruled but has since lost. He does remark elsewhere to Stephen however that Lost-hope "...is the oldest and most beautiful of my mansions - which are numerous...[19]". It may be therefore that the task of reforming his new possessions will strain even Stephen Black's powers of organization.