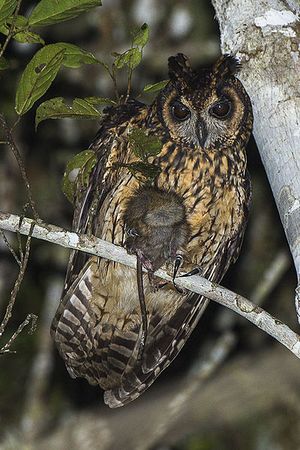 An owl with its prey

Miss Jane Tobias, born in 1775, was governess to two little sisters in the village of Grace Adieu, Gloucestershire. Nothing is known of her family, but as her connexions were willing for her to engage herself in the governess-trade it is to be supposed though they might be respectable, they were poor. The girls of whom Miss Tobias had charge were orphans under the guardianship of their late mother's cousin, a Captain Arthur Winbright of the ___shires. The captain, though no doubt affectionate, was a dashing and careless young man and, like many soldiers, of rather disorderly life. He was seldom able to afford his wards much of his time, and left them therefore very much to the care of their governess.

Miss Tobias - being in person rather tall, somewhat of a bluestocking and sadly lacking in those endearing little ways by which ladies make themselves agreeable to the masculine part of creation - was in general not much liked by the village, yet she seems to have formed for her little charges that strong attachment which helpless infancy can so readily command in the female breast. She also struck up a particular friendship with a Mrs Field, wife of a highly respectable gentleman resident in those parts, and with Mrs Field's grown-up niece-by-marriage, a Miss Parbringer. These two ladies in time became her intimate companions.

As to her governessing, Miss Tobias discharged her duties diligently, even going beyond perhaps what is required in the education of females by teaching Miss Ursula (8) and Miss Flora (4) a little Latin. Indeed it appears Miss Tobias was altogether too keen in her search for knowledge, for it is fairly certain that she explored the library at her charges' home, Winter's Realm, ransacking the shelves for works on magic; and it appears she was not unsuccessful, for the previous owner of the house, a Mr Enderwhild, had himself been a magician. What books she found she not only studied herself, but encouraged her friends Mrs Field and Miss Parbringer to read likewise. Magic is an engrossing subject but it is one which, many feel, the Fairer Sex is ill-suited to explore. Indeed even Jonathan Strange, though generally a bold advocate of women's "rights", seems to have entertained strong doubts about the magical interests and proceedings of the three ladies of Grace Adieu. He met them while visiting his brother-in-law Rev. Henry Woodhope, rector of the village. Mr Woodhope at one time harboured tender feelings for Miss Parbringer; but at the conclusion of his visit the decided intervention of Mr Strange saw his friend translated to another parish, Great Hitherden, and all contact with the lady broken off.

This uncharacteristic interference by Strange may not be unconnected with the mysterious vanishing of Captain Winbright and his friend Frederick Littleworth, who both disappeared one night without trace while on a visit to Winter's Realm. Their departure has never been properly explained. It seems clear however that Miss Tobias had reason to suspect Captain Winbright had designs upon the fortunes, and perhaps even the persons, of the little girls in her care: and that she therefore took some radical steps to protect them. It also seems clear that Jonathan Strange understood what these steps had been, and that they did not meet with his entire approbation - hence his decision to sever the connexion between his friend Woodhope and Miss Tobias's friend Miss Parbringer. The latter, however, seems to have supported her disappointment very well; indeed, all three ladies appeared more happy than otherwise at the outcome [LoGA].

Alas, Miss Tobias left this world in 1819, only two years after the Raven King's magic was restored to England. Her translations of The Book of the Lady Catherine of Winchester, however, remain useful for modern magicians long after her passing.