Curiose Observations upon the Anatomie of Faeries 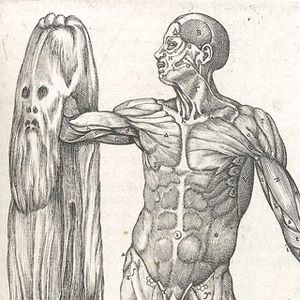 Sometimes passed off as a page from Holgarth and Pickle, this illustration is actually from the work of Vesalius. Thaumatomanes and bibliophiles beware.

The title of a work referred to by Mr. Norrell during the course of the visit of John Segundus and Mr Honeyfoot to Hurtfew[1]. Mr Norrell remarks that it contains some information on Master Fallowthought, a fairy servant of the great Dr. Pale. Although Mr Segundus had recently published a small but scholarly - and, as he believed, comprehensive work on the subject of Dr. Pale's fairy servants, the name of Master Fallowthought had escaped him. Mr. Norrell took a certain mean pleasure in drawing this omission to his attention. (Mr. Norrell of course possesses a copy of this book and Mr. Segundus does not)[1].

Although as is his wont Mr. Norrell disparages the book and its authors, it seems it is also one of the books he recommends to the attention of Jonathan Strange, as the latter is reading it at breakfast one morning while ignoring his wife's attempts at making conversation[27].

As to the work itself, although we are told only that it contains an account of the authors' dealings with Master Fallowthought, we may speculate it perhaps consists of philosophic reflections on differences between the bodies of fairies and Christians. Outwardly of course the two appear very similar; but this may be because fairies are able to shape and adapt their bodies somewhat at will (see Buckler ), and so assume a more human appearance when it suits them to do so. Mr Simonelli, quite a natural philosopher in his way, seems to have been struck by certain irregularities in the anatomy of his cousin, John Hollyshoes. These differences were evidently internal, as Mr Simonelli only remarks upon them after he has been obliged to destroy his cousin by cleaving him in twain [LoGA]. (Others have speculated the word "anatomy" in the title is meant but metaphorically, as in Burton's Anatomy of Melancholy. Since the only known copy of this work is now inside the Pillar of Darkness with its owner it is perhaps idle to pursue the matter further.)