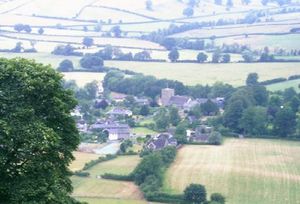 Clunbury is a small Shropshire village. It was the childhood home of Henry Woodhope and his sister Arabella, whose father was the rector there for forty-seven years[43]. It was not then, and is not now, the scene of wealth or fashion; but those desiring to know more of Clunbury can find it here .
The village is named for the river which runs through it, which though not a particularly striking feature is sufficiently so to give its name to several other places along its banks. (Scholars tell us this name is an ancient one, and identical in its origin with the River Colne in distant Essex - for both it seems were once "Colun". The meaning however is obscure.)