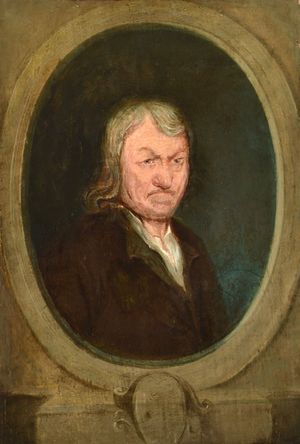 Clegg (his given name is not known) was the natural father of Vinculus. He was born in Richmond, Yorkshire, and first earned his living by walking the tightrope at fairs and wakes. Having a great fondness for the bottle however he soon gave over ropedancing and hired himself out as servant to a respectable farmer named Robert Findhelm, successfully disguising from him his vicious propensities.

Findhelm, though a farmer, was also the last keeper of the The King's Book of Magic. It had been handed down in his family for generations. Valuing it above all else but unable himself to understand what was written in it, Findhelm sent the book to the last Reader of the King's Letters in Bretton. Sadly, being an innocent and trusting man, Findhelm delivered the book into Clegg's negligent care and bade him take it safe to Derbyshire. Notwithstanding this important charge Clegg, falling into evil company on the way, first drank himself into a fury and then, when challenged to do so by a sottish companion, ate the Book page by precious page.

Once sober again Clegg realized he could never go back to face Findhelm's wrath. He made his way southwards, until some four years later he fetched up in London where he begot a natural son on a servant-girl. When the child - Vinculus - was born he proved to have a peculiar disfigurement of his skin, which was almost entirely covered by strange blue marks like some unknown form of writing. These were in fact the King's Letters: Vinculus bore on his body the text of the lost Book, which contained the words of the King's Prophecy. Although he himself could not understand the Letters, in time Vinculus sought out the last Reader, who could: and having learned their meaning and committed it to memory he was then able to repeat it in turn to all those who had a major part to play in the fulfilment of the prophecy - to Gilbert Norrell, to Jonathan Strange and to Stephen Black.

As for his wretched father, Clegg, his end was the natural consequence of a disorderly life. He was prosecuted at last for book-murder at York Assizes, found guilty, and paid the penalty for his crime on the public scaffold[30].