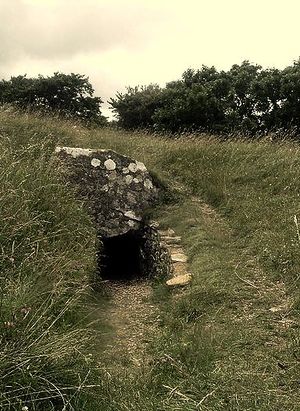 Brugh is an ancient word describing a fairy dwelling. It is usually translated as 'castle' or 'mansion' but really means the interior of a barrow or hollow hill[54]. Such barrows are sometimes met with in our native landscape and seem innocent enough, being mere caves of earth. Yet they often have an eerie reputation, perhaps attributable to their subterranean nature. Few will venture into them alone, certainly not outside the hours of daylight; and even the area about them may be shunned by the local inhabitants. Learned antiquarians however maintain that these barrows were never dwellings as such, but tombs. It must be confessed the speculation does not greatly enhance their appeal.

Lost-hope is a brugh, and its appearance changes according to the character of its ruler. During the time of the gentleman with the thistle-down hair it exists as an immense and rambling stone edifice, replete with towers, surrounded by a high wall, but dark, neglected and poorly lit. [55] After Stephen Black replaces him however it reverts to being a hollow hill, a smaller, simpler place that is fresh, natural and innocent.[68].

It is disputable whether the residence of John Hollyshoes in Derbyshire, Allhope House, is also a brugh[LoGA]. It is apparently not underground; and in appearance is either a dilapidated ruin of some antiquity or a most splendid mansion (depending on whether it is being viewed with the eyes of a fairy or of a deluded human). Dr Pale however, who visited Hollyshoes at his home, describes it as a 'castle'; so perhaps we may speculate fairies sometimes live above as well as below ground.


The etymology of brugh (*) can be retraced to the word 'broch' which is derived from Lowland Scots 'brough', meaning (among other things) fort.
Presumably the word dates back to the Vikings, given that in Norwegian a fortress is called a borg.

One could even argue that the word bridge is not-too-distant-family. For instance, the place-name Bruges (tourists love it) is mentioned as Bricge in 1037 (Anglo-Saxon chronicle) and Brugge in 1116. Probably from Old Dutch, cf. Middle Dutch brugghe, brigghe, bregghe, brogghe (Dutch Brug = "bridge").

(*): a brugh is not to be confused with a fairy fort or fairy path.

Come to think of it, there are plenty of faerie-related things a brugh should not be confused with: Fairy Flag for instance!

For those unfamiliar with this curious relic, the Fairy Flag is a piece of ancient looking fabric, that some say originally belonged to the fairies. Norman MacLeod in 1799 described it as consisting of "a piece of very rich silk, with crosses wrought on it with gold thread, and several elf spots stitched with great care on different parts of it." The crosses are no longer visible but the elf spots remain.
The flag is currently on display at Dunvegan Castle and truly worth a visit as such wondrous fairy relics are few and far between. The Dunvegan Castle website tells that the flag is thought to have been dyed yellow and is made of silk from the Middle East, and has been dated between the 4th and 7th centuries AD. An image of the flag can be seen here on the castle website.
An early version of the tale can be found in 'A tour in Scotland and voyage to the Hebrides' by Thomas Pennant (1772):