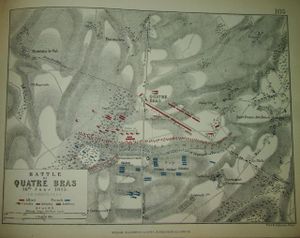 1815 military map of the Battle of Quatre Bras

Quatre Bras - the name in French means 'four arms' - was a crossroads, an otherwise insignificant spot where the road running between Nivelles and Namur cuts across the road between Charleroi and Brussels. It briefly however became of huge importance to both Napoleon and Wellington once the former launched his attack upon the allied armies. Strategically, whoever controlled the crossroads would control the movement of troops along the roads: there was thus a great danger that if the French took Quatre Bras they would be able to divide the allied forces and pick them off piecemeal. Heavy fighting therefore took place there, and at a nearby farm and wood, some two days before the decisive battle of the campaign occurred at the more famous Waterloo.


In the event the fighting around Quatre Bras cost the lives of several thousand men without either side being clearly the winner. But the Allies, at least, were not defeated, and this was largely due to the failure of the troops under General d'Erlon to arrive at the battleground in time to give the French forces decisive superiority. The important part Strange took in this outcome was not clearly understood at the time (even by Strange himself), until an account of his actions in disturbing the normal geography of the approaches to Quatre Bras was revealed by John Segundus in his The Life of Jonathan Strange. It was this constant alteration in position of lanes, woods and landmarks which confused General d'Erlon and delayed the arrival of his forces, with such a happy result for the Allies[40].