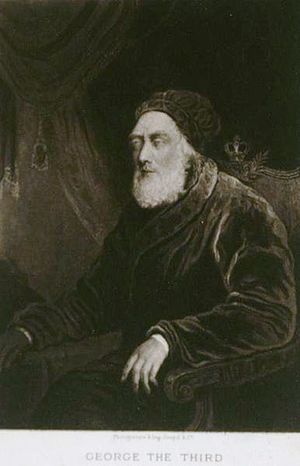 George III was the King of England during the Revival of English Magic. Although in comparison with many others who have sat upon the English throne he was a model of domestic propriety - an affectionate husband, a benevolent father, and not at all given to those sudden outbreaks of murderous despotism which have sometimes marred the reputation of previous monarchs - he was also unhappily insane; and so the King's sons (the Dukes of York, Clarence, Sussex, Kent and Cambridge) went first to see Mr Norrell in November 1814 to ask him, the Foremost Magician of the Age, to cure their father's madness. Mr Norrell having regretfully refused, their Highnesses went on to see Jonathan Strange to ask if he could do something about it. The latter agreed at least to see his Majesty - but alas, he could not do anything to cure the illness.

One major event however did happen during his visit to the King. While Strange was walking with his Majesty in the garden the gentleman with the thistle-down hair tried to lure the King to come to Faerie (more precisely, to Lost-hope); but luckily Strange was able to counter the fairy's powerful magic with a prescription found in Ormskirk's Revelations of Thirty-Six Other Worlds[33].

As we have said, before his unhappy descent into lunacy the King was renowned for being a "most loving and devoted father to his six daughters." His natural affection however led him to act almost as a gaoler to them, as he could not support the idea that one should ever marry and leave him. The princesses therefore were sent to live at Windsor Castle with their mother the Queen, and thus it was that only one of them managed to marry before she was forty. This apparently unconnected fact had its effect upon our story. It gave Childermass the odd notion of posing to Vinculus as a milliner - and one moreover plotting to undermine the virginal state of the princesses. It is scarcely to be wondered at that Vinculus quickly detected the imposition! But there, that may have been Childermass' plan all along; for he said he preferred to send Vinculus out of London by means of his own, and not his master's, chusing[21].